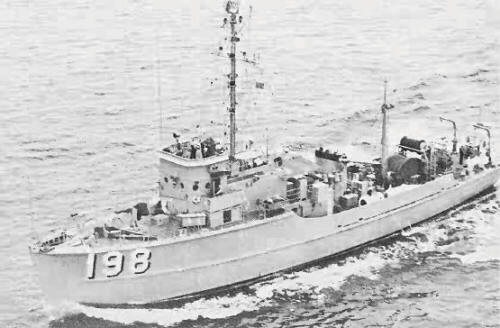 These ships were essentially versions of the Second World War YMS, initially for transfer abroad under the MDAP programme, and initially designated AMS (later MSC, for coastal). The original design did not show XMAP capability, and 'improved magnetic signature', but because of cost and time considerations, and extreme measures taken in AM design will not be used. Designs with both the new Packard (total 1200bhp) and a proven GM 8-268A (total 880bhp) diesel were prepared, the latter favoured for foreign customers. They were to be armed with a twin 20mm gun forward, compared to the 76mm/50 of the YMS and to the single 40mm of the MSO. Of 159 units of the original Bluebird (SCB 69) class launched from 1953 onwards all but twenty were transferred. They are often called the Adjutant class. Many more units were built abroad with US assistance, primarily to British designs. Where the US MSCs had wooden frames, the British used aluminium. All had controllable-pitch propellers for agility in minefields. Albatross (MSC289) and Gannet (MSC290) were the last US sweepers authorised until the MCMs of the 1980s (which may not in fact be built) and were slightly enlarged Bluebirds. Of 25 units built, only two were retained in US service. They introduced gas turbine generators for magnetic sweeping and modified gear-handling equipment.