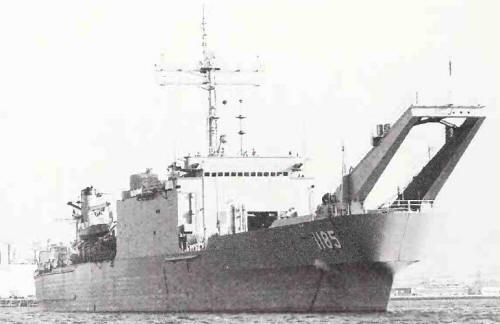 With these ships the Amphibious Force finally attained its goal of 20kt performance throughout. The many failures to design a fast LCT showed primarily that radical measures were required; in these ships there is a normal ship-shaped bow, but the upper portion splits and a long causeway was lowered through a gallows above; the bow ramp was 31.4m long. There was also a stern ramp which permitted unloading of LVTs into the water or into a landing craft or on to a pier. Above it was a helicopter deck; there was no hangar. Capacity was 385 troops, 29 tanks or 23 AAV-7A1 on lower deck and 29 2.5-ton trucks on upper deck and 500 tons of cargo; vehicles can be driven down to the lower deck via a ramp, or through the superstructure on to the helicopter deck aft. A 9m turntable at each end of the tank deck permits vehicles to turn round without having to reverse. There were davits for up to four LCVP. Four pontoon causeway sections can be carried on the hull sides.

The size and speed of the Newport class programme suggested the urgency of new amphibious construction in the late 1960s; one analyst has suggested that amphibious craft were one programme that Secretary of Defense McNamara's men strongly supported, as an essential element of the US force protection capability. Thus the prototype was ordered in FY65, followed by eight in FY66, and then by eleven in FY67.

With the advent of the LHAs, with their large well decks and vast cargo spaces, the rationale of the LSTs came into question, and as this was written the Newports were perhaps the least valuable of the specialized amphibious ships. They may well become obsolescent as amphibious doctrine shifts to distant assault with air-cushion vehicles (LCAC), which can be launched from beyond the horizon, and whose range and speed add considerably to the element of surprise in an amphibious assault.