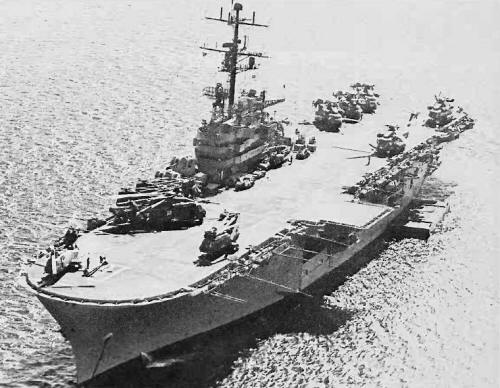 These ships were the culmination of a long Marine Corps development of vertical envelopment, or helicopter assault. The basic motivation was fear of nuclear bombardment of concentrations of landing craft off relatively restricted beaches; helicopters could approach from greater distances, preserving concentration of the assault troops at the beaches while permitting dispersal of assault shipping. Probably the single greatest defect of the LPH was its inability to operate landing craft. Thus it could not attack or support troops on the beach in rough weather, and its helicopters could not move heavy equipment over a beach. The Iwo Jima class helicopter carriers were designed at 1957 after studies of the conversion of alternative hulls, including some of the wartime fast battleships. In fact three Essex class ASW carriers were converted to become austere LPHs with cargo stowed on their former hangar decks. They retained their 127mm batteries for shore bombardments, a capability not matched by the specially-built LPH (but in fact restored in the later LHA). The basic LPH design incorporated provision for conversion to an ASW helicopter carrier, aid in this sense provided a full replacement for the CVS conversions. However, unlike the Essex class CVS, the Iwo Jimas could not operate fixed-wing aircraft, since the design never incorporated either a catapult or arresting gear. Note that, at the time of design, there was no question of retiring the Essex class CVS.

Converted aircraft carriers had not enough space for Marines. The Iwo Jimas solved this problem. Their troop spaces, accommodating 2000 troops, were air conditioned, and there were special vehicle stowage areas and special cargo facilities. Flight decks were 'spotted' to accommodate seven CH-46 or four CH-51 helicopters for take-off; the hangar can accommodate, respectively, 19 and 11 of these helicopters. When helicopters are heavily laden, they benefit from take-off runs, so that effective operation limits the number of helicopter 'spots'.

In 1971 Guam was modified as a prototype Sea Control Ship; she was later refitted as an LPH. Inchon operated minesweeping helicopters in Operation Endsweep, the clearance of the ports of North Vietnam in 1973. Tripoli was mine countermeasures HQ ship during the Gulf conflict; was mined 18.2.1991. Other units also served in the capacity of countermine mothership. Inchon was reclassified as Mine Countermeasures Command and Support Ship in 1995. She was severely damaged by fire 19.10.2001, laid up unrepaired in June 2002 and finally sunk 5.12.2004.