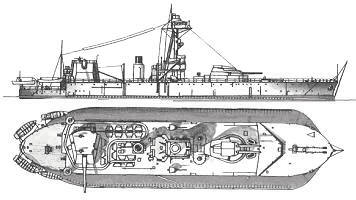 Project history The speed of building the 356mm gun monitors

The speed of building the 356mm gun monitors encouraged Churchill to suggest on 11 December 1914 the construction of at least eight more. The First Lord hoped to make use of spare 343mm and 381mm guns but as all these spares lacked complete turrets they would take about a year before they were ready. There were, however, a number of pre-dreadnought battleships which were useless for anything but coast defence, and four of these would provide eight twin 305mm turrets. The Majestics, being the oldest battleships on the Navy List, were chosen and, on the advice of Admiral Sir Percy Scott, the Elswick Ordnance Company was asked to increase elevation from 13.5° to 30°, increasing range from 12.5km to at least 19.4km (22.3km if 4crh shells were used). The guns were provided by Victorious (for Prince Rupert and General Wolfe), Magnificent (for Lord Clive and General Craufurd), Hannibal (Prince Eugene and Sir John Moore) and Mars (Earl of Peterborough and Sir Thomas Picton).     Although Churchill toyed with the idea of diesel engines and some other unorthodox ideas, haste was essential, and the design was virtually a repeat of the 356mm type. As before the installed power was insufficient for the speed required and they made only 7-8kts on trials (6.5kts was the maximum service speed). The designed AA armament was to have been 2 76mm but as production was slow they were completed with 47mm and 40mm pom-pom on high-angle mountings. Like the 356mm-gunned ships they were fitted to carry seaplanes aft but these were not embarked and the derricks were removed, but in August 1916 General Craufurd temporarily embarked a Short 184 seaplane for trials.

In 1918 three of the Dover Patrol monitors were converted to take a 457mm gun each. A 384t fixed mounting was devised, enabling the gun to elevate to 45°, but trained to starboard, with only a limited 10° arc of train. The 305mm twin turret was left in place to avoid having to ballast to restore trim, while the after part of the hull had to be specially stiffened to take the enormous weight. As there was no space below decks for additional magazines and shellrooms, sufficient shells for a day`s firing (60 rounds) were stowed on the upper deck, with cordite in cases on the forecastle deck. The cordite was kept in water-jacketed tanks to solve the problem of cooling. The original plans called for the ships chosen, Lord Clive, and Prince Eugene to be taken in hand at Portsmouth in December 1917, complete stiffening in January 1918, ship the gun by March and finish trials in May 1918, at which point the third ship, eneral Wolfe would be taken in hand. In fact the guns and mountings were delayed, and when the first mounting arrived at Portsmouth in July 1918 it was installed in the General Wolfe, and she carried out firing trials off the Isle of Wight on 7 August. Lord Clive received her gun in August-September 1918 and ran trials in October, but Prince Eugene never received hers as the war ended before it could be fitted.

Lord Clive served as test ship since 10.1920. General Craufurd was used as gunnery tender since January 1919, later that year she was offered for sale to Rumania, but paid off in spring of 1920 and put on sale list. Prince Rupert in 4.1918-9/1919 served as temporary tender to submarine depot ship Vulcan, she became accommodation ship in May 1920 for dockyard police and boats` crews. In February 1922 took over from old Achilles as parent ship for the naval depot and renamed Pembroke. Sir John Moore served since January 1919 as gunnery tender.