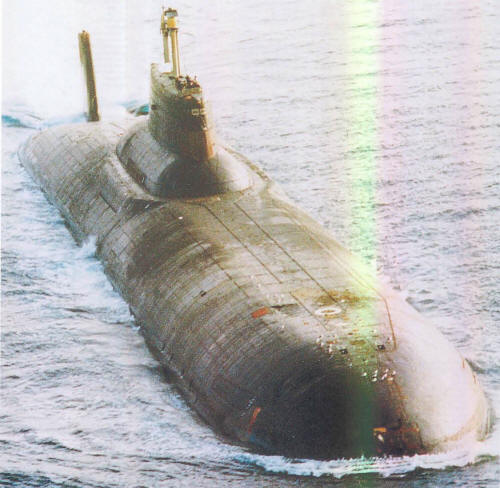 This submarine, designed by Rubin, was intended for the final phase of a sustained nuclear war. It would go out to sea, dive under the ice, and remain on the bottom for a year, surviving during a nuclear exchange. It would then be available for a reprisal attack on a recovering enemy. Hence the enormous emphasis on habitability; the submarine is extraordinary roomy, with a sauna and even an aviary. However, the effective limit on crew endurance is 120 days.

The unique configuration consists of five cylinders, mostly wrapped in the outer hull: two main units running the length of the submarine; one forward for the TTs, the torpedoes (and tactical missiles) and the bow sonar sphere, one for command/control (under the sail); and one aft for steering. Each of the main hulls contains a 190mW reactor, a 50000shp turbine, and an 800kW diesel generator. Apparently it was impossible to obtain sufficient volume in a single-cylinder of practicable dimensions, and the missiles require such large hull penetrations that it would have been impossible to place two rows side-by-side in a conventional hull. Flat decking abeam the sail contains two crew escape modules.