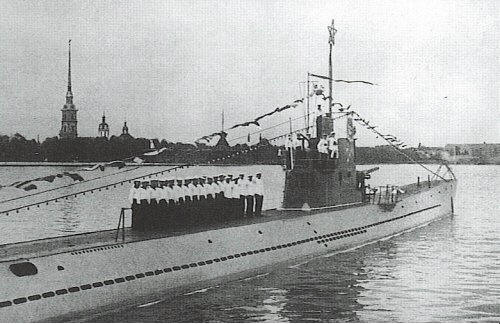 In the end of 1932 Soviet delegation visited German-Dutch "IvS" designing bureau, where it was informed about design of modern submarines, and in the next January Soviet representatives visited trials of Spanish submarine E1 (later sold to Turkey as Gür). The contract with Deschimag was signed in April, 1933 on working out of the design of new medium submarine. To the beginning of 1935 drawings were ready. A year later mass building of IX-bis series has begun. They were originally designated as N (Nemetsky [German]) class, since October, 1937 as S (Sredniy [Medium]) class.     Saddle-tank hull, with mixed construction (riveted pressure hull and welded light hull). Maximal diving depth was 100m. S-1 and 2 received diesels made by MAN, S-3 had domestic-made supercharged engines. Fore gun on IX series boats took places behind a streamline shield. Since 1941 the CT on submarines was covered.