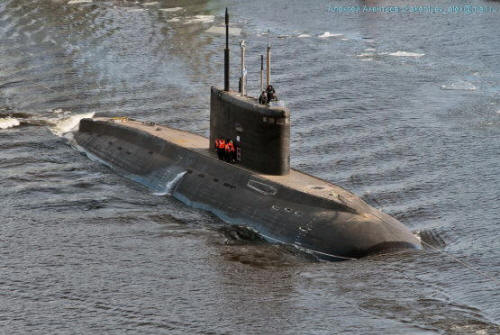 An across-the-board improvement over the standard project 877, presumably offered by export. In 2012 it was decided to build new submarines of improved 06363 project, armed with Kalibr-PL cruise missiles, instead of delayed project 677 program units. They have extended range, land-attack missile capability, increasing quieting/stealthiness and greater degree of automation over the older sisters. The bow has been reshaped to improve flow, and some auxiliary machinery was moved aft from the bow compartment to reduce noise interference with the passive bow sonar array. A more efficient model of the diesel-generator set is employed. Pressure hull was lengthened to 53.0m to accommodate rafted main engines, also allowing tankage for additional diesel fuel. Two maneuvering propellers are mounted in the internal ducts just forward of stern planes, with the shafts to the motors protruding directly aft through the after pressure bulkhead. Submerging time is 2min. All tubes can launch 53-65K, 53-56B, 53-56BA and SET-53M and USET-80 torpedoes, TEST-71M torpedoes and Kalibr-PL missiles are launched only from two tubes. All torpedoes can be launched from 240m depth.