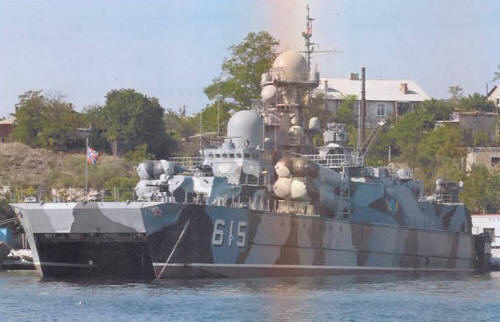 Prototypes of successors for Project 1234, but building of these very expensive ships was really stopped after collapse of Soviet Union. Officially Bora was commissioned 12.5.1997, Samum 26.2.2000. Third ship was cancelled before her keel was laid officially. Ships are really catamarans with side skegs (sidewalls), air is pumped to the space between the skegs. Ships can move using gas turbine and cruising diesels with air cushion simultaneously, using only cruising diesels and air cushion, only cruising diesels with no cushion. They can also move using only air cushion propellers keeping 3kts speed. They have high seagoing qualities and have comfortable accommodation for their crews.