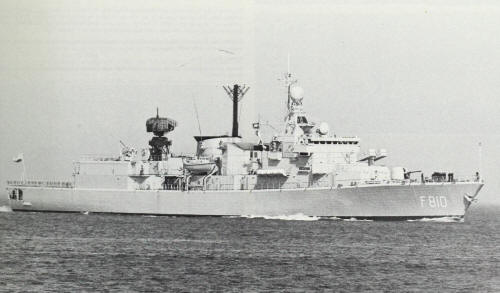 Banckert 1985 Many thanks to Wolfgang Stöhr for additional information on this page.

Designed as a replacements for the twelve postwar ASW destroyers of the Holland and Friesland classes, the frigates of the Kortenaer class were intended to have the maximum degree of commonality of weapons, electronics and propulsion systems with other contemporary NATO frigates. Attempts were initially made to develop a common hull-form with the Royal Navy, but these and approaches to other NATO navies foundered. The Netherlands Navy therefore elected to develop its own 'Standard' design, so-called because it was planned to build ASW and AAV variants on a standard, common hull, and because the design conformed to NATO requirements for ocean escorts.

Eight were ordered in 1974, with a further four in 1976. However, the original F812 and F813 were sold to Greece while fitting out, and it was decided that these should be replaced by two AAW variants.

The hull-form was similar to that of contemporary French construction, with continuous upper and main decks, a single rudder of the semi-balanced type, and a clipper bow with 'negative' sheer The desire for good performance in a seaway resulted in a length / beam ratio less favourable than a generally accepted, and careful design was necessary to ensure that the ships met speed requirements.

The propulsion system and machinery layout were identical to those of the Tromp class. All machinery is resiliently mounted and there was a single pair of non-retractable fin stabilizers. A high degree of automation means that the total engine room complement was only twenty-nine. The ship can be fought and navigated from the operations room, which was fitted with a SEWACO-II tactical data system. On the main deck there was a central passageway running the entire length of the ship, and personnel spaces were grouped in such a way as to minimize traffic.

Two Lynx helicopters can be accommodated, but the ships carried only one during peacetime operations. Similarly, only two or four Harpoon SSM were fitted in peacetime, although this figure would be increased to eight in wartime. The weapons systems were all in widespread service with other NATO navies, but the electronics systems, with the sole exception of the hull sonar, were of Netherlands design and manufacture.