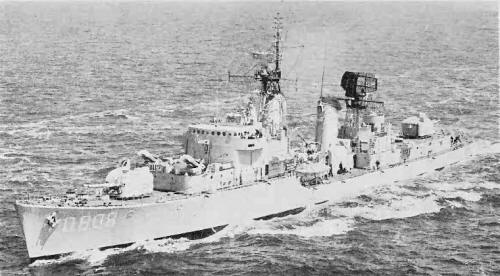 Holland 1973 Many thanks to Wolfgang Stöhr for additional information on this page.

Specifically designed for ocean ASW operations, the Holland class were the first European fleet destroyers to be completed without anti-ship torpedoes. They were required to protect task forces or convoys against submarine attack, to hunt submarines either singly or in ASW hunter-killer groups, to assist in the air defence of task forces or convoys, and to defend the latter against attack by light surface forces. To equip them for the latter two roles they were to carry a heavy dual-purpose armament, the 120mm Bofors twin mounting chosen was fully automatic and radar-controlled, capable of 45 rounds per minute and with an elevation from -10 to +85°. Additional back-up in the AA role was to be provided by 5 57mm/60 Bofors guns, while a number of ASW mortars were considered before the adoption of the four barrelled Bofors 375mm RL.

Six ships were ordered in 1948 for completion in 1952, and six more for completion in 1953-1955, but it proved impossible to meet these dates largely because of the damage caused to Netherlands defence industries by the war. In order to speed construction the first four units were built using equipment salvaged from destroyers of the Isaac Sweers class and stored away in sheds during the German occupation. The other eight units then became a separate subgroup of Friesland class.

The Holland class were fitted with propulsion machinery which had been designed for much smaller destroyers, and this imposed some restrictions on size and maximum speed compared with their successors. Two of the sets of turbines had been built prewar for the uncompleted units of the Isaac Sweers class, triwhile a further two similar sets had been ordered by the Germans. In spite of this, 40.3kts were achieved on trials, albeit without a number of important items of equipment on board.

The hull form was reminiscent of contemporary British destroyers. Unusually, for ships of their size, side armour as well as deck protection was incorporated, in order to reduce vulnerability to near-misses from aerial bombing, and great attention was paid to watertight subdivision. The high-tensile A52 steel which had proved so successful in prewar vessels was used for plating and all structural work. In order to reduce topweight, aluminium alloy was used wherever possible, the entire after deckhouse being so constructed. Electric welding was used throughout - the most extensive use to date of this technique by Netherlands shipyards.

Wind tunnel tests on a forefunnel enclosed in a quadruped lattice mast led to the adoption of a common funnel design for the destroyers, the two cruisers and Karel Doorman (on refit). The air search radars under development were not ready at the time of completion of the Holland class, and all four ships were initially fitted with a pole mainmast. This was changed to a short lattice structure in 1955. The additional topweight involved may have been responsible for the reduction of the light AA armament to a single 40mm fitted forward of the second funnel.

Noord Brabant was 9.1.1974 rammed by British cargo vessel in Western Schelde. Damages were too heavy for repair and the ships was broken up.