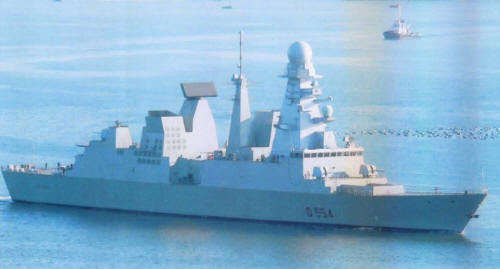 Are the result of a 1991 agreement made with France and the United Kingdom to design a ship acceptable to all three navies. An international joint-venture corporation, Horizon Ltd., was established in 1995 to build at least the initial units of the class for the three partner countries by the three prime contractors, GEC-Marconi. DCN International, and Orizzonte SpA. Italy originally planned to buy six ships, then four, to replace the Audace class destroyers and the two already-stricken Andrea Doria class cruisers. The program was reduced to two during 1993 because of the expense incurred in the purchase of the ex-Iraqi Lupo class frigates. The British pullout from the program in 1999 put the program in temporary limbo, but France and Italy agreed in 1999 to continue, and the first two were ordered 26.11.2000. France has built two similar ships as the Forbin class.

When carried, the 8 Teseo Mk 2 SSM are fitted in two quad launchers amidships. The class is fitted with the TC-ASIST helicopter landing system, and in addition to general utility duties, the helicopter can be used for ASW and for attacking surface ships with missiles. The 76mm mounts are installed two abreast forward and one atop the helicopter hangar. Fitted with the Vampir MB (Modular Bispectral) IR detection and tracking system.