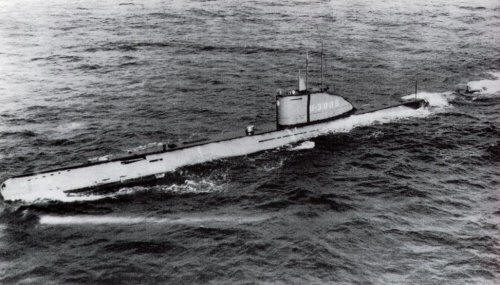 Most perfect submarines of the World War II era and one of the most revolutionary designs in shipbuilding history. The decision on designing was accepted in April, 1943 after abandoning from works over XVIII series with hydrogen peroxide turbines. New boats were developed on their basis, but with replacement of experimental machinery by traditional diesel-electric with strongly increased battery capacity, thanks to what XXI series boats (and XXIII series as their smaller analogue) has received nickname "Elektroboot". The design concept provided for possibility during all route to be in submerged position, never surfacing.

Double-hulled, an outer hull and fin structure had new streamline form, with a minimum of appendages; pressure hull with 28-31mm-thickness amidships had cross-section in the form of "8". A working diving depth was 135m, maximal 200m; minimal diving time was 18sec. Main electric motors worked on shafts through reduction gears. Besides them, there were two low-powered "crouching" motors, ensuring silent 6kts submerged speed. There was a snorkel. Armament included only bow TTs with fast recharge system: theoretically, XXI series submarine could shoot all torpedoes during a half an hour. Instead of 6 torpedoes in TTs submarine can carry 12 TMA mines. Strong artillery have refused, having limited by two twin 30mm MGs (because of unavailability of the latter the majority of boats was commissioned with two twin 20mm MGs) in the streamline cupolas included to CT contours. All boats received sonars and active and passive radars.

Method of building of the boats was also progressive, providing their assemblage from eight large ready sections. It has allowed to moderate building term of one submarine till 176 days and it is significant to shrink work expenditures. Order for first 270 submarines was given out to three manufacturers 6.11.1943 with delivery term by February, 1945; till the end of 1944 828 submarines were totally ordered. Before capitulation of Germany 121 submarines were commissioned, 11 more (U2532, U2547, U3045, U3046, U3047, U3050, U3051, U3531, U3532, U3533 and U3534) have been destroyed during outfitting after launch. After passing trials many boats had to come back to shipyards for elimination of "children's illnesses" that has significantly delayed their ultimate availability, therefore unique XXI-series submarine gone out to route became U2511.

U2540 was recommissioned in 1960 as trials submarine with data as given in the table.