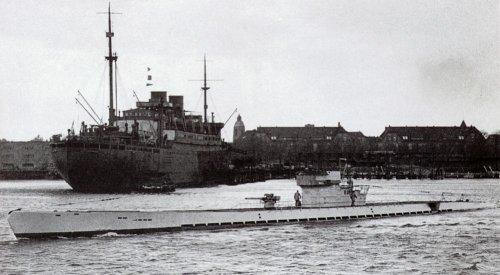 Oceangoing submarines for operations in far areas. The design was developed on the basis of U81-86 submarine cruisers of the period of the First World War with application of decisions included in the I series. Double-hulled, maximal diving depth was 200m, minimal diving time was 35sec. At the same time, the big dimensions done these submarines less mobile and manoeuvrable and fast in submerged position.

Series IXC had even more increased dimensions and other arrangement of oil fuel tanks. Advanced IXC/40 series had improved electronic equipment, and on last boats of this subgroup the deck sheathing was sheared for diving time reduction. In total 134 IXC/40 series submarines were ordered, but in the mid-1943, in connection with moral obsolescence of the project and reaming of mass building of XXI series, part of orders was cancelled.

All boats of a series were distinguished by presence of three periscopes. Instead of torpedoes 44 TMA or 66 TMB mines could be carried. Strengthening of antiaircraft armament has begun from late 1942. 37mm gun was transferred from a deck to a special platform ("Wintergarten") behind CT (under which two additional spare torpedoes were stored), instead of 1 single 20mm MG 2 single or twin such MGs were installed, 105mm gun was removed. From the second half of 1943 submarines received snorkel.

During operations 150 of 194 commissioned IX series submarines were lost.

U125 was sunk 6.5.1943 by British destroyer Oribi and corvette Snowflake NE off Newfoundland. U126 was sunk 3.7.1943 by Wellington of 172nd RAF sqn NW off Cape Ortegal, Spain. U127 was sunk 15.12.1941 by Australian destroyer Nestor W off Gibraltar. U128 16.5.1943 was damaged by Mariners of VP-72 USN sqn off Recife (Brazil) and at approach off American destroyers Moffett and Jouett scuttled by crew. U129 was stricken in August, 1944; on reparations she was transferred to France and broken up. U130 was sunk 12.3.1943 by American destroyer Champlin W off Azores. U131 was sunk 17.12.1941 by British escort destroyers Exmoor, Blankney, destroyer Stanley, corvette Pentstemon, sloop Stork and Martlet fighter of 802nd FAA sqn (escort carrier Audacity) in the Central Atlantic, NE off Madeira.

U155 and U516 surrendered and were scuttled by Allies during operation "Deadlight".