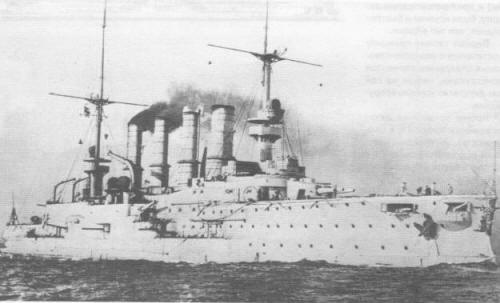 Germany's last and best armoured cruisers were still basically bigger and faster Roons. With an almost identical armour scheme they carried twice the number of heavy guns (the extra weapons were disposed in casemates at the comers of the midships citadel at upper deck level) though with fewer secondary guns. However, they compare less well with their British contemporaries on the China Station in 1914: Minotaur and Defence which admittedly were slightly bigger, carried an armament of 4-9.2in (larger, though fewer than the German guns), and 8-7.5in, far better distributed than the German armament, in hulls with much the same protection and speed.

Scharnhorst and Gneisenau were sunk 8.12.1914 off Falklands by gunfire of British battlecruisers Invincible and Inflexible.