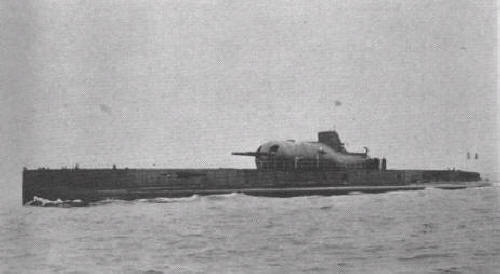 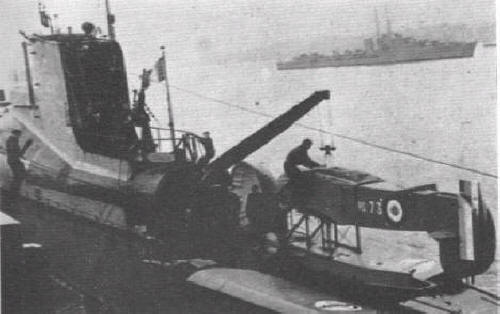 Surcouf Many thanks to Wolfgang Stöhr for additional information on this page.

On other data, TTs were placed so: 4 bow 550mm TT with 8 torpedoes and 2 triple trainable mounts with one middle 550mm tube and two side 400mm tubes.

Project "Q5", built under the 1926 programme. To beginning of WWII Surcouf was the largest submarine in the world and carried artillery of biggest calibre resolved by Washington Treaty. Strictly speaking, corresponding article of treaty was adjusted under Surcouf (and British X1). Surcouf was intended for long-term (up to 90 days) ocean cruising on enemy communications, first of all, British, with usage of torpedoes and artillery. There was a special accommodation for prizoned crewmen from sunken vessels. Main role was assigned to artillery. To it promoted both strong gun armament, and big diving time of a submarine cruiser (up to 2min). Surcouf carried folding reconnaissance seaplane Besson MB.411 in hangar. She was unique submarine with possibility of reload of trainable external TTs (the truth, only being surfaced). Design represented substantially an experimental pattern and did not received development. With it handicapped both Treaties limitations, and absence of intelligent concept of usage of such submarines: during war effective service for Surcouf did not been found. Machinery has appeared insufficiently reliable. Already 18.10.1939, after two campaigns, the cruiser should been underwent major repair.

In June, 1940 under one diesel submarine passed to Plymouth, where 3.7.1940 she was captured by British (4 crewmen were lost in firing). 15.9.1940 she was transferred to FNFL. Assumed conversion to transport (in particular, for supply of Malta) has not taken place, basically for political reasons. Surcouf was considered lost at collision with US s/s Thomson Lykes in Gulf of Mexico 18.2.1942.