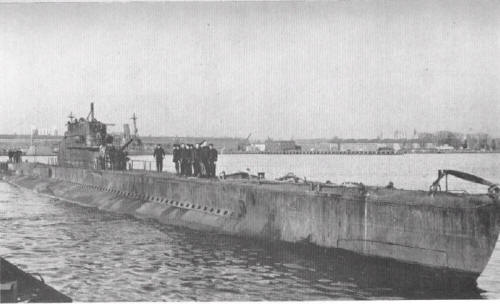 During building minor alterations were brought into the design. Basically they concerned a machinery. So, boats of first series (first 17 submarines) had 6000hp diesels and made 17kts surfaced. Submarines of the second series (6 submarines) had 7200hp diesels and reached 19kts surfaced. 6 submarines of third series reached 20kts with 8000hp diesels. Double-hulled. As a whole they were successful ships, proved to be seaworthy and handy enough ships, had high surface speed. At the same time, to the WWII time, diving time was too long (45-50sec). In 1941 ballast tanks were partly converted for storage of additional fuel oil. It has allowed to increase surface endurance to 10000nm.

At annexation of Gabon by Gaullists Poncelet tried to show resistance, but was damaged by British sloop Milford at Libreville and scuttled 8.11.1940. Four submarines (Pasteur, Achille, Agosta and Ouessant) were in summer 1940 under repair at Brest; they were blown up 18.6.1940 in base to avoid capture by German troops. 7 more boats were scuttled at Toulon 27.11.1942 (Redoutable, Vengeur, Pascal, Fresnel, Henri Poincaré, Achéron, L`Espoire). Redoutable, Pascal and Henri Poincaré were salvaged by Italians, but were sunk by Allied aircraft 11.3.1944, 23.3.1944 and 9.9.1944 respectively. There is also a version of scuttling of her by Italians. Two submarines were lost in September, 1940 at attack of Dakar by British and FNFL forces. Ajax became victim of British destroyer Fortune 24.9.1940, and Persée was sunk by destroyers Foresight and Inglefield 23.9.1940. Three more submarines were lost at Diego Suarez at occupancy of Madagascar by British in May, 1942. Monge was sunk by British destroyer Active 8.5.1942, Le Héros was sunk by air group of British carrier Illustrious 7.5.1942, and Bévéziers was sunk by air group of carrier Illustrious directly in harbour of Diego Suarez 5.5.1942. Four submarines were lost during operations in the North Africa. Le Conquérant was sunk by American aircraft off Villa Cisneros (Morocco) 13.11.1942. Actéon was sunk at Oran 8.11.1942 by British destroyer Westcott. Sidi Ferruch was sunk 11.11.1942 by American carrier aircraft off Casablanca. Le Tonnant received heavy damages as result of air attacks, but managed to break into Spanish waters and ran aground at Cadiz 15.11.1942. Sfax was torpedoed by German submarine U37 off Casablanca (Morocco) 19.12.1940. Protée was a part of "X" Force and was disarmed at Alexandria. In 1943 she joined Allies and was lost on a mine at Toulon 29.12.1943.

Pégase based in Indochina. In September, 1941 she was disarmed at Saigon and gradually taken apart for spares.