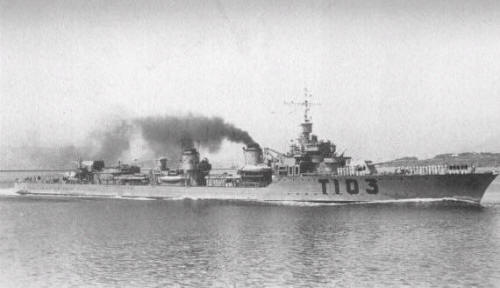 Mameluk 1942 Many thanks to Wolfgang Stöhr for additional information on this page.

Mameluk 1942 Many thanks to Wolfgang Stöhr for additional information on this page.

Built under 1932 (1 ship), 1935 (2 ships), 1936 (4 ships) and 1937 (2 ships) programmes. Destroyers of this class were created as escorts for new fast battleships of Dunkerque class. Ships of previous classes could not solve this task, as did not possess necessary speed. Besides, it was required to strengthen their antiaircraft armament considerably. At the same time, their ASW and AA possibilities remained obviously insufficient. Semi-automatic main guns were similar to secondary guns of Dunkerque and were mounted in turrets. Insufficient elevation angle (no more than 30°) excluded their usage in air defence.

Le Foudroyant, L'Adroit, Cyclone, Sirocco and Bison before 1.4.1941 were named Fleuret, L'Epée, Lansquenet, Le Corsaire and Le Flibustier. Four of them were renamed into memory of destroyers lost in a beginning of war.

Last four ships of 1938 and 1939 programmes (L`Intrépide, L`Opiniâtre, Le Téméraire of 1938 programme and L'Aventurier of 1939 programme), remained on slipways, should be built under modified design and in certain degree represented analogue of British AA cruisers with heavy antiaircraft guns. It was supposed to equip destroyers of this subgroup with DP main guns of new model. Thus the light AA armament should be limited by MGs, and torpedo armament should be decreased to 6 tubes. ASW armament should be absent. Changes in the design have led to appreciable growth of displacement (to 2180/2882t and dimensions (118.2ppx11x8x4.2m) and despite increase in machinery power to 62000hp fall of speed from 37 to 35kts was expected. Works on them have begun in August, 1939, but no one was completed to descent, and L`Opiniâtre was never officially laid down.

As the ships were commissioned in wartime (also after an armistice), a number of their characteristics it was not possible to check up in practice. Though it is known, that Le Hardi on trials has shown 39.09kts speed. At commission the antiaircraft artillery has been strengthened.

Fleuret and L`Epée participated in attack to Gibraltar 24-25.9.1940. However, because of technical defects they have appeared disabled.

Only FR33 was returned to France, but ship was not a subject to restoration.