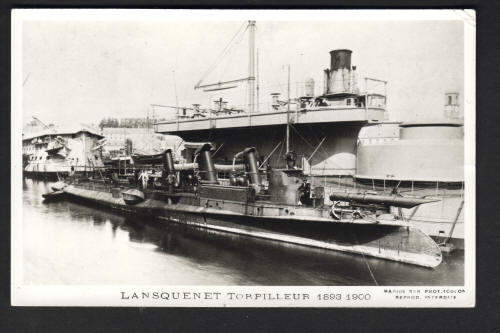 Ordered some months after the high-speed designs, this experimental vessel was built by the boiler-designer Oriolle who had no experience of TB construction. This bizarre-looking vessel had three heavily-raked funnels, a ram bow surmounted by the TT mounting, and superstructure in the form of an armoured carapace; the hull and superstructure were built of steel. She made only 24kts on trials instead of the 26 promised by the builder, and the boilers were so disappointing that they had to be replaced after a few months' trials. Lansquenet was only accepted in 1898 (and for only 22kts) but trials continued and she was not put into service until 1900 - after 7 years of trials.

She was involved in a collision almost immediately and laid up, but not sold until 1905.