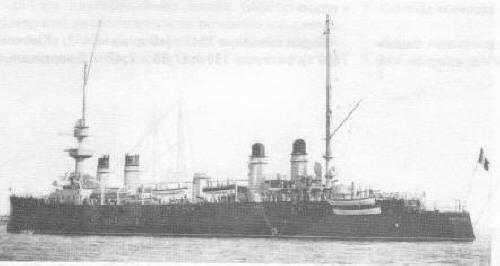 Smaller version of Jeanne d`Arc but with only four boiler rooms instead of six. To the First World War beginning they already became outdated, but actively served on miscellaneous theatres. Tactiacl diameter was about 900m.

Main belt extended from 1.35m below water to main deck and to upper deck in fwd part in 4.4m from the bows, ending by 85-40mm bulkhead 4m from the stern. Its 2.5m high lower strake was 150mm decreasing to 50mm at lower edge, thickness of this strake decreased to 90mm at fore and 80mm at aft ends. Upper strake tapered from 100 to 75mm from lower strake to main deck level and from 60 to 40mm from main to upper decks. Curved lower deck had 55-50mm flat part connecting with lower edge of main belt by slopes. 20mm flat medium deck connected with top of main belt. A space between these decks was divided into many small compartments, filled with coal or stores. Casemates had 30mm rears, 23mm roofs and 50mm ammunition tubes. 100mm guns were protected by shields. Casemate area was closed by 120mm fwd bulkhead between forecastle and upper decks and 100mm aft one between forecastle and lower decks.