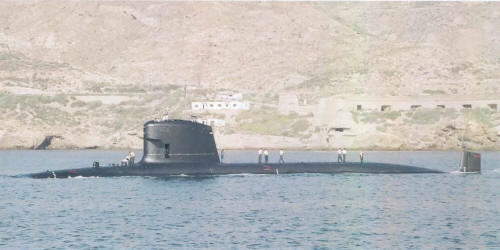 French 'Scorpene' design. Ordered in 1997. DCN performed about 60% of the construction work, including manufacturing the pressure hulls and outfitting the bow and amidships sections: Navantia fitted out the stern sections, while each company conducted final outfitting on one unit. As built, these submarines do not employ an Air independent propulsion system. All machinery is "rafted" for sound isolation. Only nine personnel are on watch under normal conditions. The lower rudder is shorter to allow for "bottoming." The casing and sail are fabricated from GRP. Two of the torpedo tubes have pneumatic ram launching to allow for the launch of SM39 antiship missiles: the other four tubes are of the swim-out variety.

Carrera and O'Higgins were badly damaged, running ashore by tsunami off Talcahuano 27.2.2010.