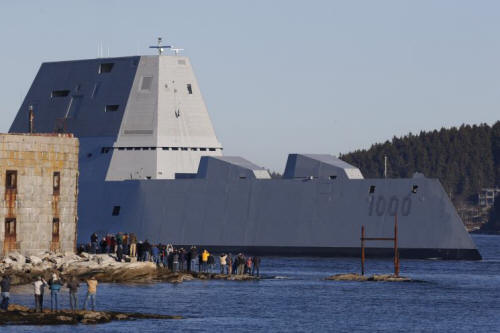 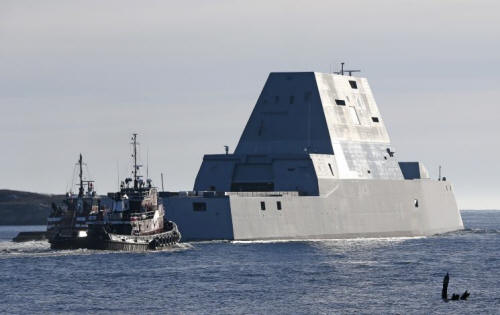 By 2001 Department of Defence decided that the previous DD21 program was too specialized and requested that a new DD(X) be capable of more general-purpose duties. The DD21 guided-missile destroyer program was reconstituted as the DD(X) 1.11.2001 and officially named the Zumwalt class 7.4.2006. The Zumwalt class is optimized for land-attack and littoral missions. Initial plans called for a class of 32 ships, though by 2009 this had been reduced to 3 units with funding going instead to purchase additional Arleigh Burke class destroyers. The ships are being built primarily at General Dynamics Bath Iron Works but  some portions (deckhouses, hangars) are built by Ingalls SB at Pascagoula.

The ships are built with inward-sloped sides above the wl in what is known as water-piercing tumblehome hull design to reduce radar cross-section. Additional signature reduction features are included in the design, to include IR and acoustic; the superstructures enclose the masts, antennas, bridge, exhaust stacks and sensors. The class is fitted with stern boat ramp to launch and recover two 11m RIBs. The superstructure made extensive use of composites, and the Zumwalt class design includes an integrated electric propulsion system. Two Rolls-Royce MT-30 gas turbines will power the ship as part of the Integrated Power System (IPS). Extensive use of automation permitted reduced crew size.

Ships are armed with Raytheon's 80-cell Mk 57 Advanced VLS fitted in peripheral compartments to increase survivability by projecting any explosions outward and away from the ship. Two 155mm Advanced Gun Systems, each with 300 rounds of ammunition, are carried for land-attack operations. Each ship also carried two 57mm Bofors SAK, standartized by USN as Mk 110. Hangar can accommodate two MH-60R helicopters or one MH-60R and three MQ-8B Firescout drones, flight deck is 45.8x15.6m and fitted with ASIST landing/arresting system. The Zumwalt class is not expected to carry SSM but will carry the SM-3 missiles in addition to SM-2/SM-6. As a result of budget cuts, SPY-4 Volume Search Radar (VSR) is not installed. Software modifications permitted the SPY-3 to be used for horizon search or volume air search operations. The SPY-4 radar and SM-3 missiles can be added in the future. Ships are equipped with WLD-1 RMS (Remote Minehunting System), including unmanned submerged minehunting vehicle.